St Corona was a young lady who attempted to help St Victor when he was being tortured for the Catholic Faith.

They arrested her, and tortured her for her Faith.

They tied her limbs to two palm trees that had been bent to the ground, and then released the palm trees, which tore her in half.

Her remains are in a basilica in the northern part of Italy, and she is invoked, among other things, for help during epidemics. 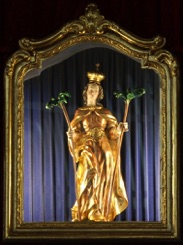